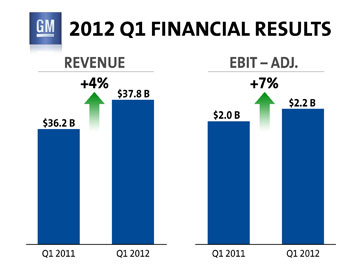 In the first quarter of 2011, GM’s net income attributable to common stockholders was $3.2 billion, or $1.77 per fully diluted share, including a net gain from special items of $1.5 billion or $0.82 per share.

“The U.S. economic recovery, record demand for GM vehicles in China and the global growth of the Chevrolet brand helped deliver solid earnings for General Motors,” said Dan Akerson, chairman and CEO.  “New products are starting to make a difference in South America, but Europe remains a work in progress.  We’ll continue to work on both revenue and cost opportunities until we have brought GM to competitive levels of profitability.”

GM Results Overview (in billions except for per share amounts)

Based on the company’s current outlook, GMNA’s results for the second and third quarters of 2012 are expected to be comparable to the first quarter of 2012 due to the scheduled downtime at factories that produce full-size trucks.

“We are aggressively eliminating complexity to reduce our costs, and at that same time, we are preparing for more than 20 major vehicle launches around the world in 2012 to drive revenue this year and farther into the future,” said Dan Ammann, senior vice president and CFO.

General Motors Co. (NYSE:GM, TSX: GMM) and its partners produce vehicles in 30 countries, and the company has leadership positions in the world’s largest and fastest-growing automotive markets.  GM’s brands include Chevrolet and Cadillac, as well as Baojun, Buick, GMC, Holden, Isuzu, Daewoo, Jiefang, Opel, Vauxhall and Wuling. More information on the company and its subsidiaries, including OnStar, a global leader in vehicle safety, security and information services, can be found at http://www.gm.com.

In this press release and in related comments by our management, our use of the words “expect,” “anticipate,” “possible,” “potential,” “target,” “believe,” “commit,” “intend,” “continue,” “may,” “would,” “could,” “should,” “project,” “projected,” “positioned” or similar expressions is intended to identify forward-looking statements that represent our current judgment about possible future events. We believe these judgments are reasonable, but these statements are not guarantees of any events or financial results, and our actual results may differ materially due to a variety of important factors. Among other items, such factors might include : our ability to realize production efficiencies and to achieve reductions in costs as a result of our restructuring initiatives and labor modifications; our ability to maintain quality control over our vehicles and avoid material vehicle recalls; our ability to maintain adequate liquidity and financing sources and an appropriate level of debt, including as required to fund our planned significant investment in new technology; the ability of our suppliers to timely deliver parts, components and systems; our ability to realize successful vehicle applications of new technology; and our ability to continue to attract new customers, particularly for our new products. GM’s most recent annual report on Form 10-K and quarterly reports on Form 10-Q provides information about these and other factors, which we may revise or supplement in future reports to the SEC. 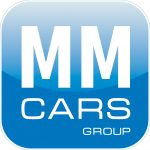